My husband calls these little guys primordial bugs because they look ancient, but how such daft, clumsy creatures could have survived for eons is a mystery to me.  They sneak into the house with the single-mindedness of a deprived dieter attacking a frozen cheesecake, but once inside, they completely lose sight of their agenda, so I’ve never been able to figure out what their end game is.  Far as I can tell, they bumble around aimlessly and crash into things, or plant themselves directly in harm’s way and wait for disaster to strike.  Their mortality rate is 100%, minus the ones I capture and deport back to the Great Outdoors.  (Unless they make it back inside, which they’re probably trying to do at this very moment…)  Survival of the Dim-witted-est? 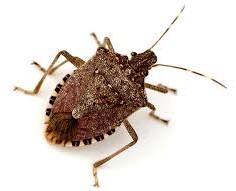 INVASION OF THE STINK BUGS
(Ghazal)

Keen to enter, they slink around screens and wait
for windows to be opened, motivated stink bugs

Others breach the threshold in my laundry basket
affixed to socks and towels, calculating stink bugs

and fall victim to heat-finishing; discovered in the
dryer lint screen, corpses of dessicated stink bugs

only to perish in the toilet bowl, beneath a shoe,
at the paw of a torturous cat, ill-fated stink bugs

The lucky ones succumb to old age, lying on their
backs on the tile, pathetic, leg-waving stink bugs

What is the purpose of these pungent Kamikazes?
Explain to me, please, why God created stink bugs

15 thoughts on “LOOPHOLE IN DARWIN’S THEORY”