Questions arose last week about whether Peaches is my first cat, my first foray into feline serfdom.  Actually, he’s not, but I’m a bit out of practice.  We took a kitten into our apartment in 1989, then another, then another…  For the past 28 years, we’ve had at least one and as many as six cats fleeing the vacuum cleaner and winding themselves around our legs.  Runty Caper set the house record for longevity, 23 years.  When she could no longer outrun our puppy, she began playing dead, proof that an old cat can learn new tricks.  As the cats aged, we moved them into a (baby) gated community in a spare bedroom that slowly devolved into a nursing home and then a hospice.  I thought my cat years were over, but during a brisk end-of-autumn walk, our dog flushed Ginger out of a corn field.  Ginger was a decidedly outdoor cat who roamed the neighborhood in weather so inclement it would stop even the postman.  She played with the local skunks, showed up every morning for breakfast, knocked on windows using her paw when she wanted to come in.  It was a new experience for me, a veteran indoor cat person.  When Peaches moved in next door, he was smitten with Ginger and followed her everywhere.  He was heartbroken when we lost her and moped around for weeks, hanging out in our flowerbed pining for her, and eagerly accepting any affection we would give him.  The neighbors (renters dismayed when the owner put the place on the market) closed on a new house last week, one near a state highway.  Afraid for Peaches’ safety and unable to keep him inside all the time, they asked if we’d be willing to take him.

Peaches was docile and affectionate.  His people said he loved being indoors, probably because it was such a rare treat.  Our new adoptee slept in his basket, basked in the sunny bay window, quickly mastered his litterbox, and licked the gravy off his canned food before finishing the tidbits.  Despite ample opportunities for escape, he never tried to make a break for it.  I figured it would be simple to transition him to a house cat.  WRONG.  On Day 5, he did a runner.  Why would he take off on such a cold, drizzly day?  I can only guess he spied his name on the calendar next to the word vet.  I spent the better part of the morning trying to find and capture the scrappy bastard, completely forgetting that since orange cats possess limited ability to camouflage, Peaches would have spent the last two years honing his feline Ninja skills and familiarizing himself with every nook and cranny in the neighborhood.  Trust me, opposable thumbs are no match for a combination like that.

Below is my account of the experience told in SHADORMA, a Spanish form with six lines and the following syllable count: 3 / 5 / 3 / 3 / 7 / 5.  Any subject is fair game; no final shift or turn is necessary.  Shadorma may be written as a single stanza or a series. 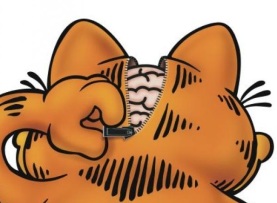 INSIDE A CAT’S HEAD

Keen instincts:
On scheduled vet day,
he slips out
the dog door,
reveling in freedom and
his own cleverness

Detailed maps
of the neighborhood:
every fence,
every tree,
spaces under decks and sheds
where he can lay low

14 thoughts on “RE-ENTRY INTO FELINE SERFDOM”