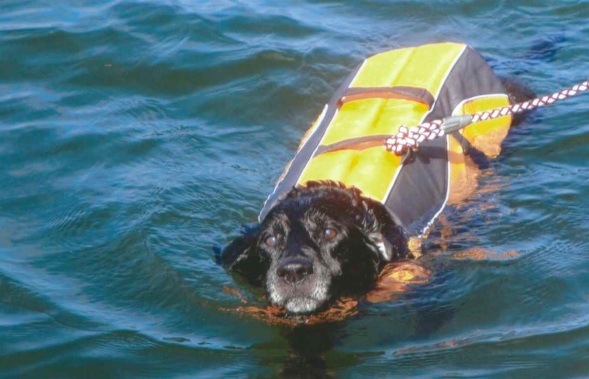 A tiny paw tapped my pant leg.  It belonged to one of the Puppies For Sale, a round-bodied Lab whose sleek black coat was dotted with curly cowlicks.  Two soulful brown eyes gazed up at me from his irresistibly earnest little face and within minutes, Earnest and True had an official name on his “papers” and a window seat in our car.  Our resident Alpha was thrilled with her new role as big sister, alternately mothering and bossing around her little charge.  Easygoing Earnie was the yin to her yang and her most devoted follower.  Although she patiently taught him everything she knew, he never learned to give dog kisses.  And my attempts at tutoring him, however heroic, were entirely unsuccessful.  Charming and gregarious, Earnie was the star of Puppy Kindergarten; the classes were held in the vet’s office and at every appointment for the next fifteen years, he searched under the waiting room chairs for his playmates.  He wasn’t given to mischief unless it involved food.  Or balls.  Or keeping his gnarly toenails as far away from the clippers as possible.  Until his final year, when he inexplicably melted into skin and bones, Earnie was overweight and usually on a diet.  That said, he never missed a meal, and sometimes ate two if his sister took her eyes off her dish.  He raided the garbage can.  He ate stale bread we threw out for the birds.  He talked sympathetic dog sitters out of extra food and treats by pretending he was starving.  His other passion was collecting balls; some he came by honestly, others he “creatively acquired” from neighbors’ yards, the park, or on walks.  Over a lifetime, his cache filled a laundry basket.  In fact, he learned to swim when he chased a tennis ball into our garden pond.  Swimming was another talent he pursued with vigor, constantly seeking out bigger and better venues.  If the local public pond wasn’t frozen, he considered it fair game and jumped in.  When the creek ran high and fast from the spring rains, he rode down it like a water slide.  He could barely contain his excitement the first time he laid eyes on Lake Erie, a body of water so expansive that it touched the sky.  He chased his dreams and stayed ahead of old age for a long time, but it gained a foothold when he lost his sister, his lifelong BFF. To help fill the void, we adopted two young pound pups who doted on him, snuggled with him, groomed him, and kept him entertained with their antics.  As his clock wound down, we concentrated on filling each moment with the things he loved most, from the simplest of pleasures to the craziest of dreams:

1.  Go for walks with the family, on his own power, at his own pace.  He flatly refused to ride in a wagon; we tried, and he tipped it over.

2.  Run.  His hips were riddled with arthritis, so I’d often lift up his back legs and run along beside him while he sprinted on the front ones.

3.  Roll in the snow.  In his opinion, it was the best part of winter.

5.  Sunbathe.  He had a favorite spot on the sofa where he stretched out to soak up the late morning rays, a daily rendezvous he never missed.

6.  Eat whatever and whenever he pleased.  A dream-come-true for a perpetually hungry dog who had spent most of his adult life on a diet.

7.  Swim in the ocean.  So we fired up the RV for an eleventh hour road trip to the coast of Maine.  That’s him, above, paddling in the Atlantic.

8.  Collect more balls.  He acquired his last one, an orange and green tennis ball, just two weeks before he passed.  It was wedged against a mailbox post and half-hidden in the snow, but that did not deter him.

9.  Own a plush pink Kong football.  It was the only thing he wanted for Christmas.  Santa brought one, and Earnie never let it out of his sight.

10.  Go peacefully at home, surrounded by his family.  Dr. Brett Ellis, our beloved vet, obliged, and made a housecall when the time came.

Earnie was true blue to the end, but my final memories will forever be:

THE decision could be delayed no longer.
Come, I begged the vet, but
not quite yet… wait until
tomorrow.

The day of reckoning refused to be blue
or a somber shade of gray
to match my mood.
Instead,

Each detail was tinged with contradiction,
shades of pink so cheerful,
I longed to smack them.
Senseless.

The fuzzy pink football hugged tight to his chest,
the one he held close day and night

The eager pink tongue that gulped treats laced with dope,
then lolled from his lazy grin

The juicy pink core of a steak grilled mid-rare,
the last he would eat in this world

The sparkling pink bottle we uncorked and shared,
toasting with goblets raised high

Whenever a four-legged shadow cavorts
across a striking roseate sunset,
I am certain that he
is behind it.

10 thoughts on “EARNEST AND TRUE TO THE END”